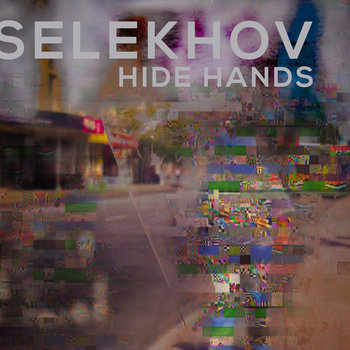 Russian experimental noise project SELEKHOV has released a new 3-track EP titled Hide Hands, carrying on with the big array of noise featured on the band’s prior works.

It kicks off with the title track, which is about as straightforward as the album gets – droning guitars, a consistent, driven beat, and some post-punk vocals echoing from behind it all.  “Interplace” begins quite minimally, but over its four minute course is delicately wrapped in noise.  Eventually it becomes this thick, intense swirling mass of layers – the sort of sound you get lost in.  While “interplace” is essentially a crescendo, built as it goes along, the final track on Hide Hands, “violence”, is a deconstruction.  Starting off with the same sort of intensity at the conclusion of “interplace”, this track is slowly unraveled until it’s hypnotic, spaced-out innards are revealed.  The track sort of grooves on from this point, with textures added and subtracted here and there.

A lot happens in the thirteen minutes on this EP, offering a lot of variety and some really good tunes.  Best listened to with headphones at high volume from start to finish, and it’s available for free on Bandcamp so there’s really no excuse not to check it out.